Wait for the Lord and be strong.

Take heart and wait for the Lord!

Did you see Bob Haaf’s piece in last week’s newsletter?  I thought it was pretty good.  He asks a couple of questions: first, “Is it enough just to believe in God, or in Jesus, or in the Holy Spirit—that is, ‘consider to be true’ without ‘assured reliance?’”, and then, “Why does the Apostles’ Creed stop with believe?,” rather than saying “I believe and trust in God … Jesus Christ … the Holy Spirit”?

If “believe” means “consider to be true,” as Merriam-Webster says, then it is clearly not enough just to believe in God.  James 2.19 says, “You believe in God?  Big hairy deal.  So do the demons.”  (Not the exact wording.)  But “believe in” can also mean “be wildly enthusiastic about.”

There is a Model A club that sometimes meets in our building. These are people who have great enthusiasm for Ford’s successor to the Model T. The Model A was produced from 1927 to 1932, and was hugely popular, with more than four million of them being sold.  Checking briefly online, I found that you can get one for as little as $15,000 or so, but most cost more like $25,000. I suspect that keeping one running would require serious effort, too, since, except for the valves in the inner tubes, and maybe the spark plugs, not many of its parts could be replaced at the local auto parts store. (Do they still sell 6 volt brake light bulbs?)

Someone who would put enough money and effort into a Model A, a car that isn’t really useful as a car, to keep it running, must be seriously smitten. Both that person and I believe in Model A Fords, but in very different ways.

The Apostles’ Creed was written by people who thought about God the way the most fanatical, over-the-top Model A enthusiast thinks about his car.  Or cars, probably, if he’s been at it for a while. They didn’t believe in the Father, and Jesus Christ, and the Holy Spirit the way I believe in Model A Fords. They believed in God the way one of those club members believes in Model A Fords.

And that kind of belief includes trust, so I think Bob is right about the trust part, too.

Hope to see you between services on Sunday in Fellowship Hall! 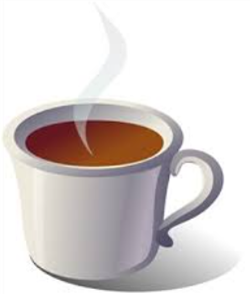 by the Worship and Music Committee

The theme for Lent at Grace is hands, how God’s hands and Jesus’ hands were used in the Bible.

Services on Wednesdays will be held in the Chapel at both 12 noon and 7 p.m.  At the 7 p.m. service the Holden Evening Prayer will be sung.

On Ash Wednesday we learned how God’s hands are writing: “Behold, I have graven you on the palms of my hands”, Isaiah 49:16. The word graven here means etched, written.

The topics for the remainder of Lent through Maundy Thursday include:

Please consider attending these special Lenten services to prepare for the celebration of Easter!

Church doors that are separated from potential worshipers by steps clearly say, “Children of God with physical limitations are not welcome here.” 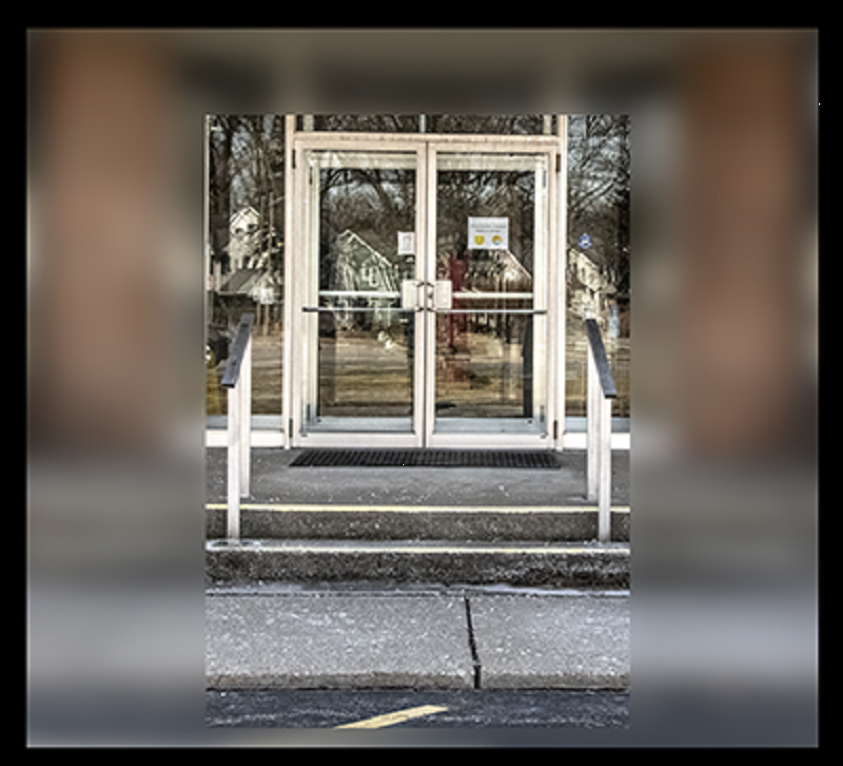 The Grace Easter Egg Hunt was started almost 25 years ago as a small activity for the children that was held in Fellowship Hall. It quickly grew to the point where it was moved to Brenner Hall. As attendance grew, new activities were added.

This ministry became a function of Worship & Music Ministry with the main volunteer base coming from choir support. As the Easter Egg Hunt became more and more popular, involvement expanded to the congregation in general. In 2020 Covid caused us to give this ministry a pause.

Given the event really isn’t the ministry of Worship & Music, the recent loss of several key organizers, the magnitude of effort required, the number of volunteers needed to run the Egg Hunt; it has been decided to cancel this year’s event.

Many feel the Easter Egg Hunt Ministry is important to Grace and the Community, but for it to continue in 2023 and beyond, the congregation will need to increase its support as planners and volunteers. Provided the necessary volunteer base becomes available, Christian Education and the Outreach Ministries, will work  together to make it happen.

Planning for the 2023 event will need to begin soon. If you have a heart for the Easter Egg Hunt, please call the office so we can start to develop a volunteer list specifically to help with this event.

Thanks in advance for your consideration,

The season has ended! To check your knowledge a quiz is being developed and will be put out by the credenza by the office on Thursday March 3. No cheating allowed – so no texting, hand signals, Morse code, eye blinks with Mr. Bob Haaf. Please place your answer sheet in Gretchen’s mailbox in the Sacristy.

Official winner (s) will be announced on April 1.

Most of us like the color red as it is the color of Hawaiian Punch, red wine, apples, good for you Salmon, cinnamon red hearts and Swedish Fish and red pop!

We can enjoy some of these every day and even though some are not very nutritious.

How about donating blood on April 1st so as many as three other people can enjoy all that wonderful red food!!

We have appointment time open – you may schedule yourself on the Red Cross Website or call them or call Gretchen 419-944-5166 to schedule.

This is a way to help the earth!

10.Have you checked out the Blood On The Move Board? It is really interesting to see how far our blood has gone! If you donate and have received and e-mail from the Red Cross with a destination, please email Gretchen so it can be added

11.Remember: Grace is not the building but the people of Grace carrying out God’s mission.

This can be traced back to the 1500’s when pets often took shelter on thatched roofs, and when it rained heavily, the roofs would get slippery and the cats and dogs slid off, making it “rain” cats and dogs.

The Parish Nurse will be away from the church March 11- March 25. If you have a need please contact the office as there is someone who can assist you.

Grace has a new policy on severe weather which includes severe thunderstorms and tornados. The goal is to keep the parish members and guests safe.

So, what do you need to know?

When a Severe Thunderstorm Watch is issued be aware that this can change suddenly to a Warning.

Remain inside the building.

Move away from windows and skylights in case of flying objects and broken glass.

SAFE PLACES IN A STORM AT GRACE

The basement across from the office.

If you are unable to move to a room without a window lie down on floor under pews or tables and protect your head with hymnals, personal belongings, etc.

Do not leave the building until 30 minutes after you last hear thunder – UNLESS YOU SMELL GAS or there IS a FIRE then leave immediately.

DO not return to the building if there is damage until cleared by Fire /EMS.

Check out these areas before it is an emergency!

*** A Severe Weather Drill will be held at both Sunday Services in the next couple of months.

Shrove Tuesday Fellowship Pancake Dinner was a success!  $271 was raised for the Good Samaritan Fund to be used by the pastor to help those in need of emergency help.

Pancake Flippers, Ron Schneider and Walter Schulish, kept the griddle cakes coming to make sure everyone had plenty of hot flapjacks all evening long.

Over 10 volunteers from Worship & Music, Outreach, and the general congregation, worked together to serve over 100 meals. This event could never have been accomplished without volunteers. Planning, promoting, decorating, shopping, preparing, cooking, serving, and cleaning are all part of the work that takes place to put together an event like this. 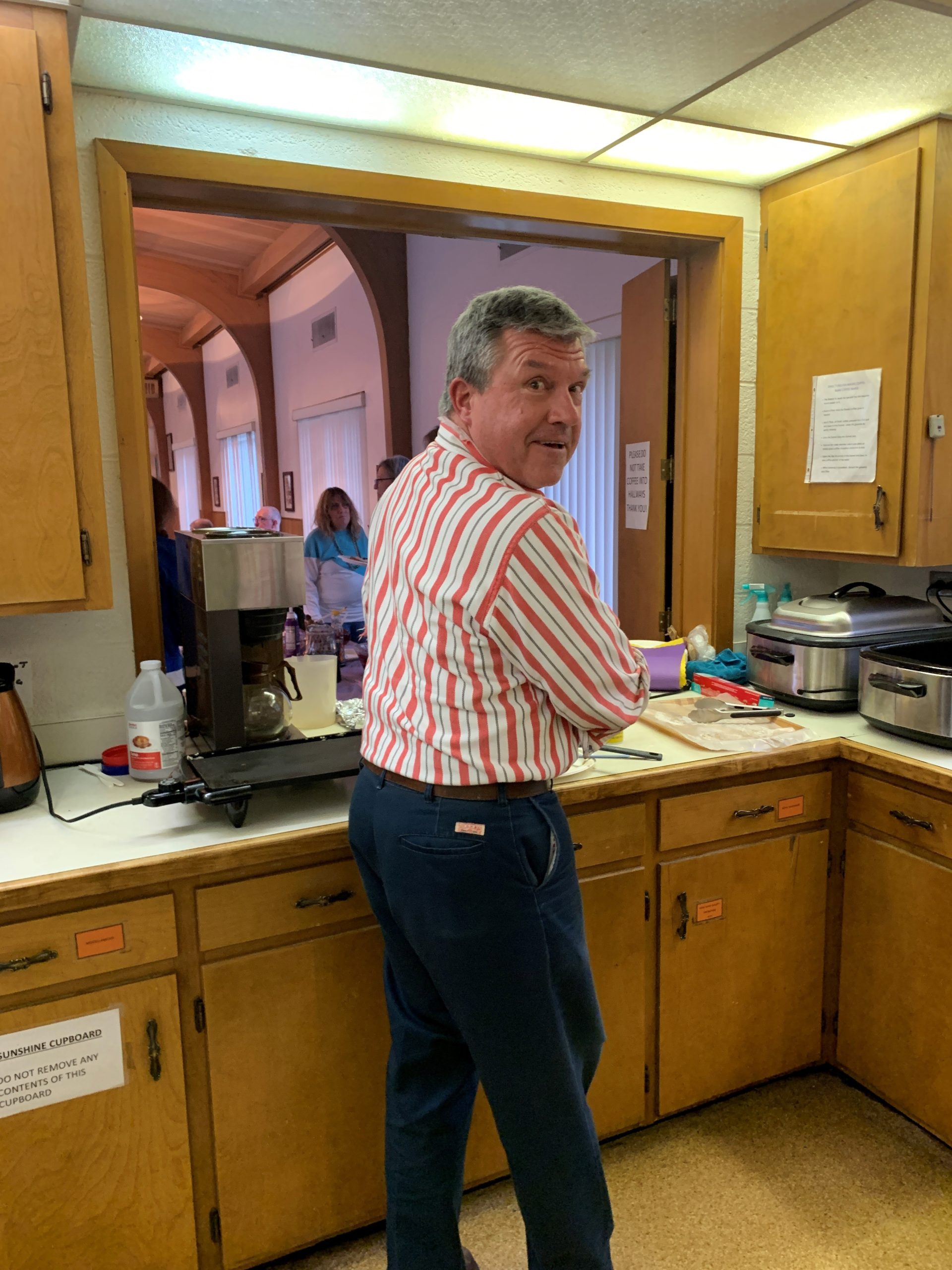 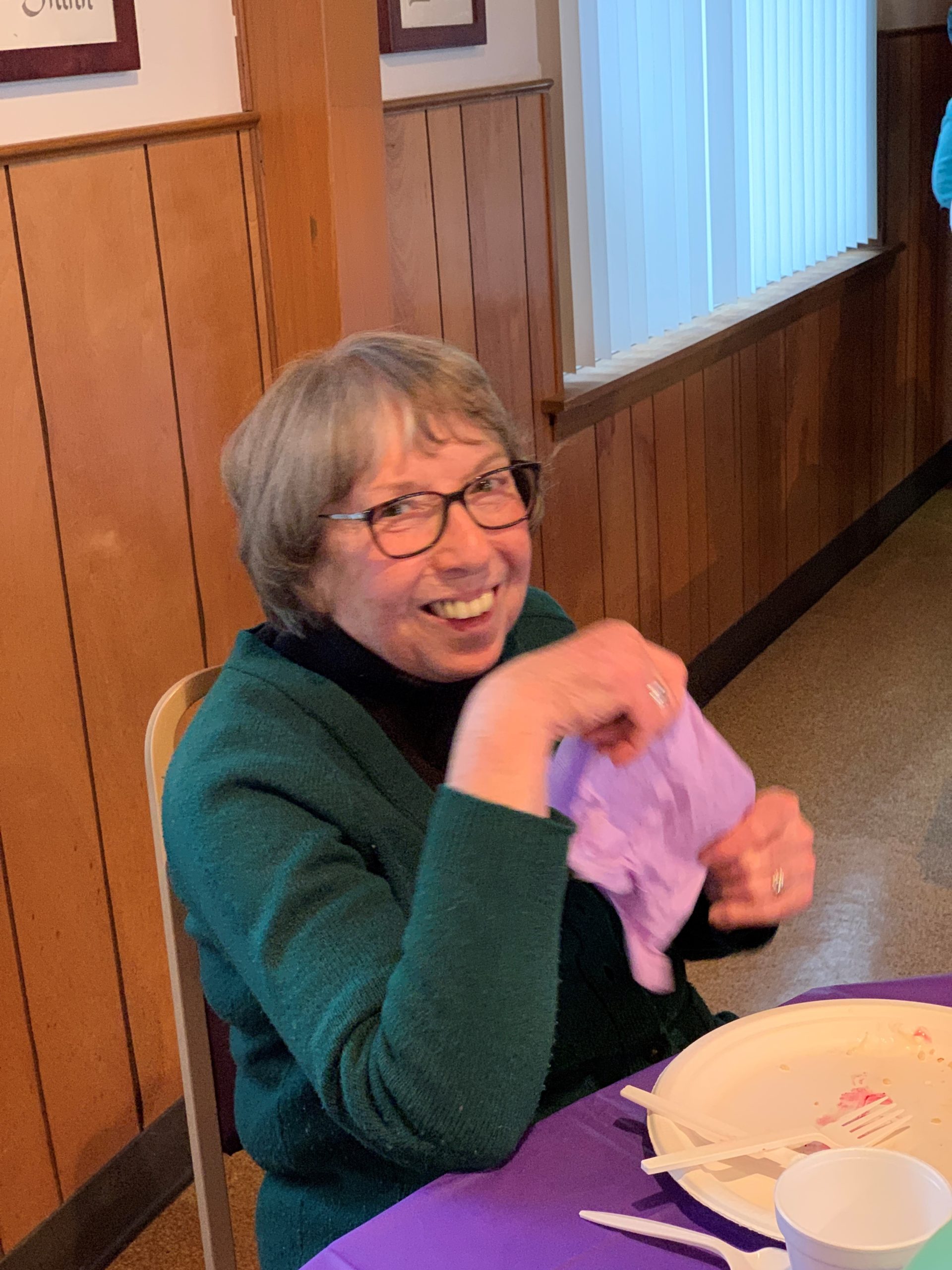 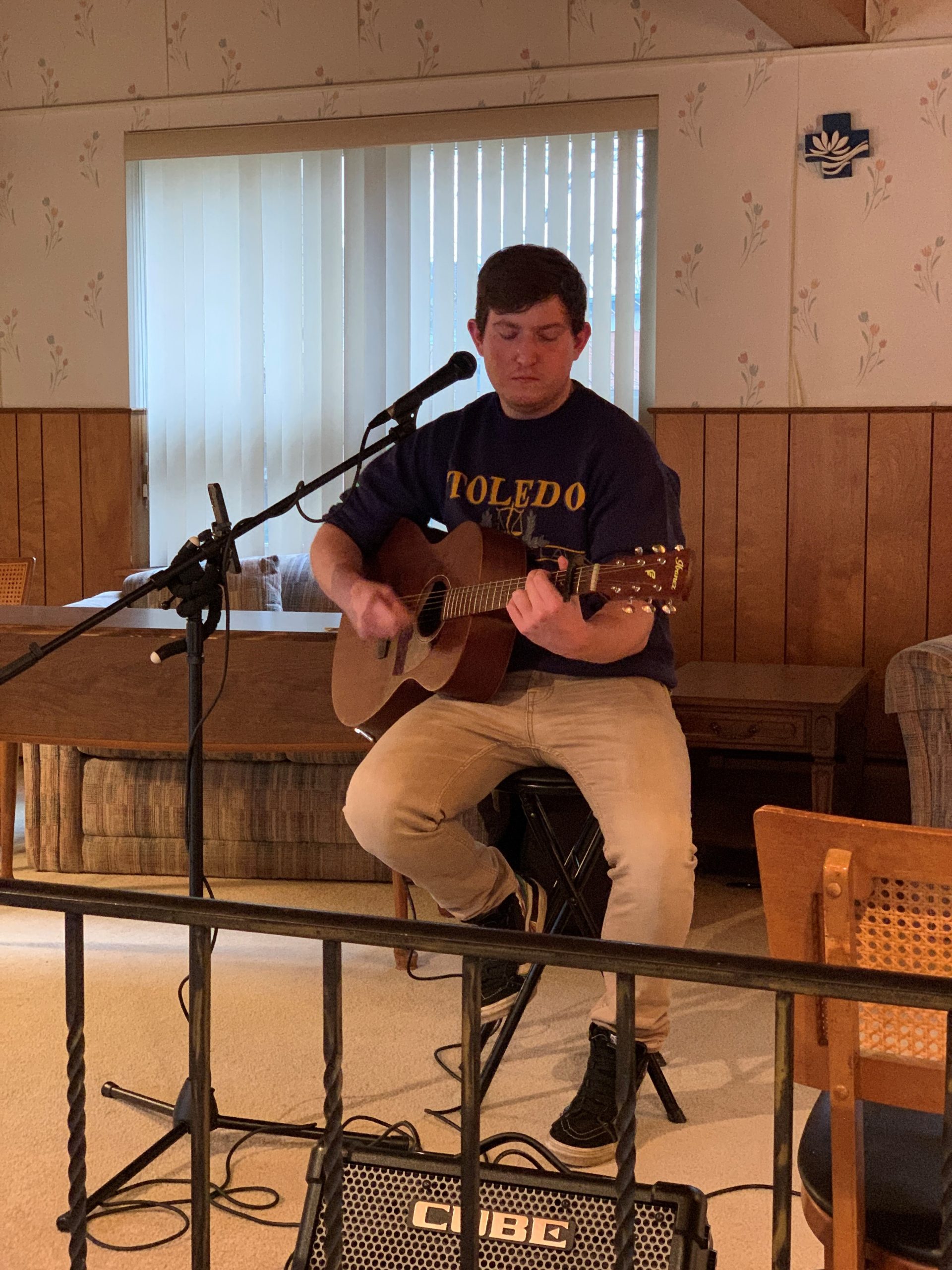 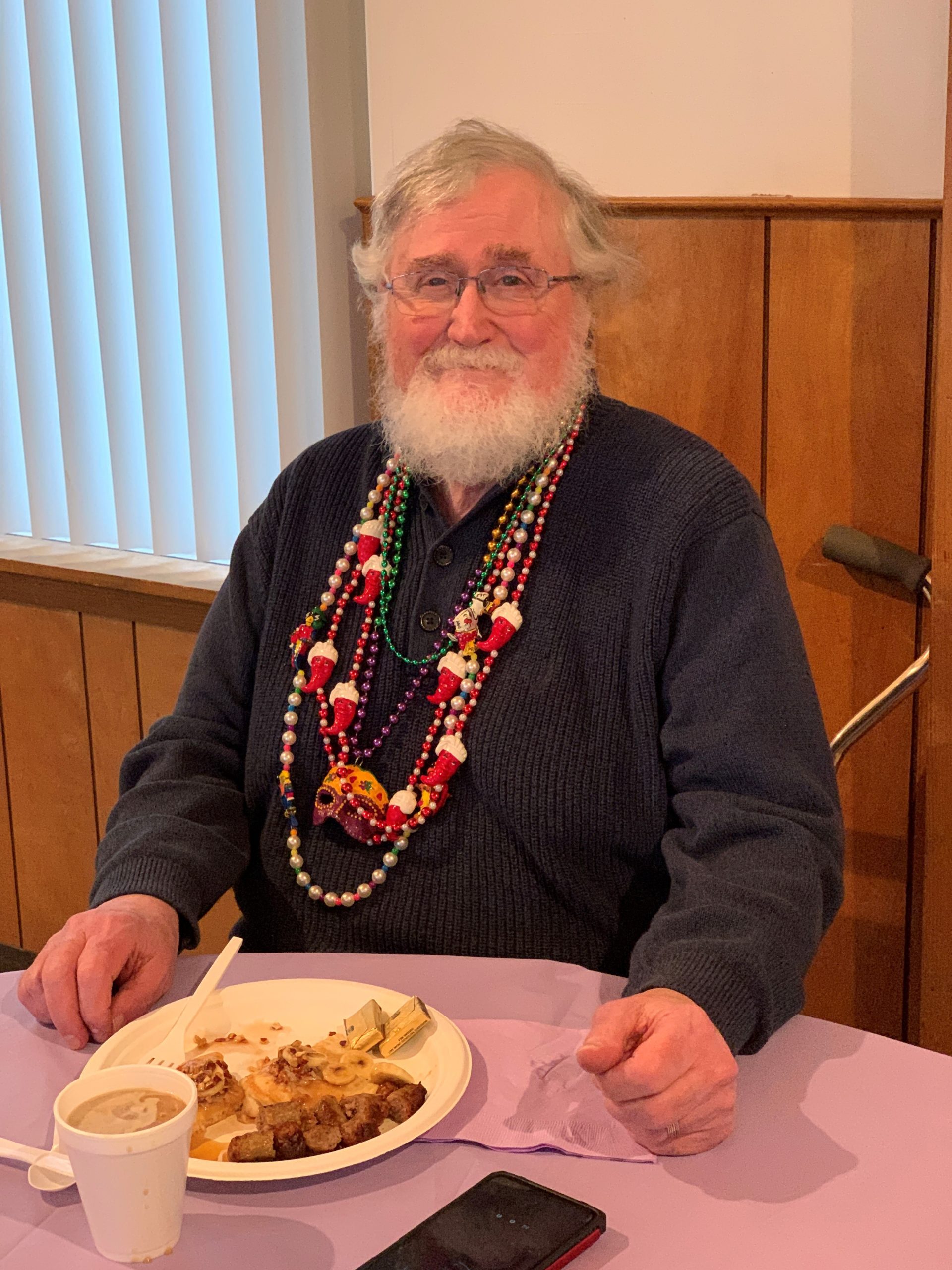 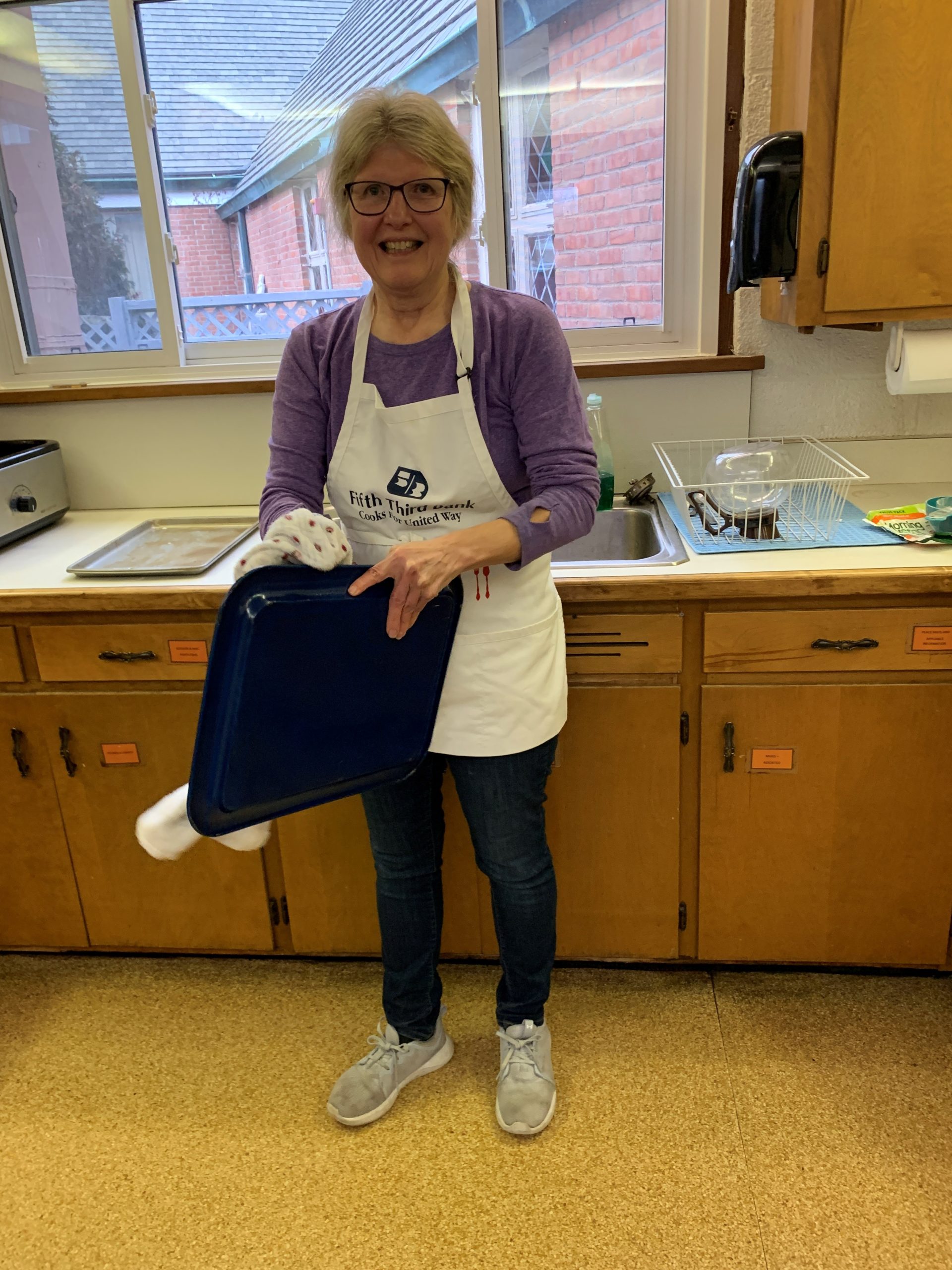 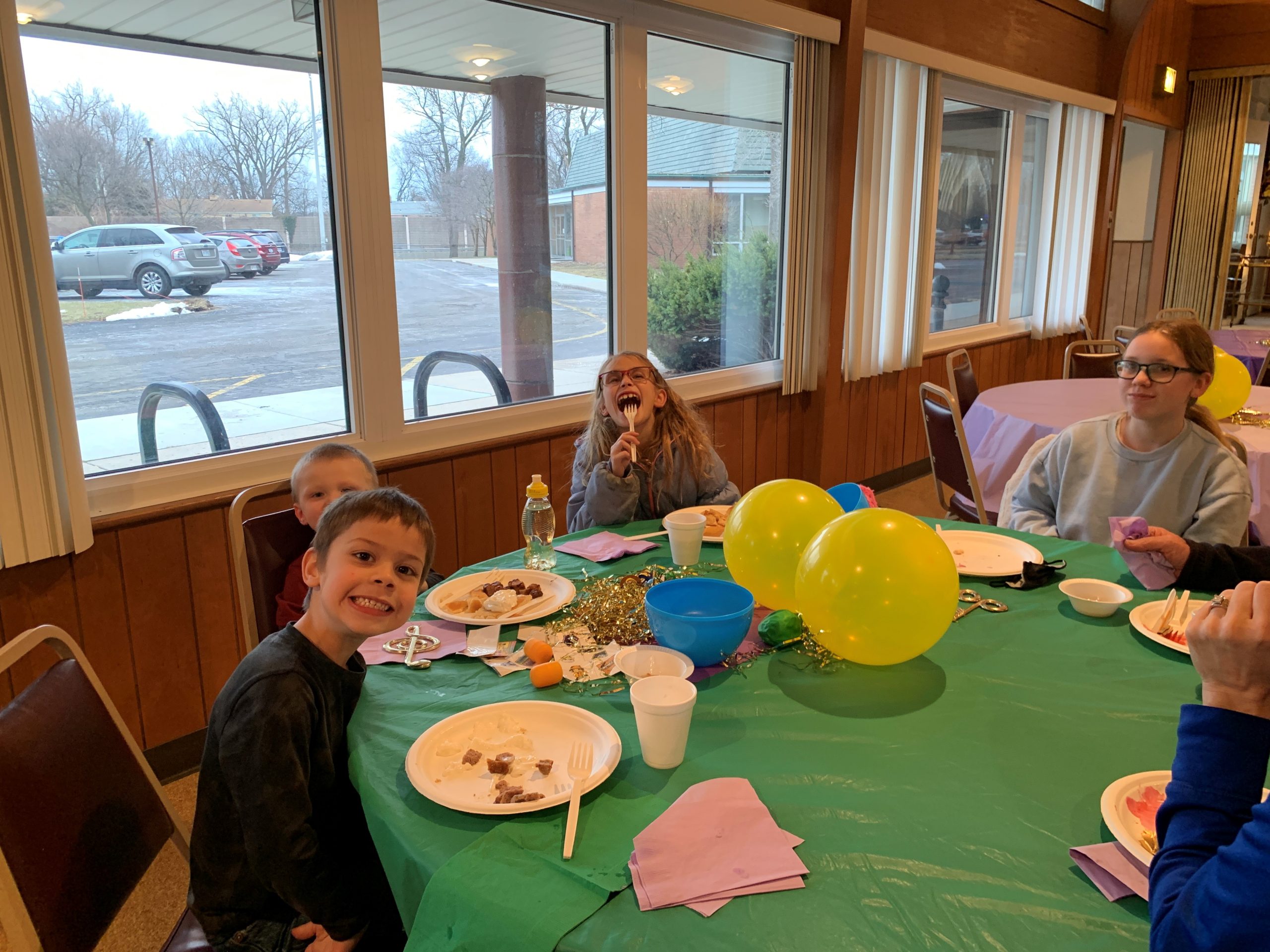 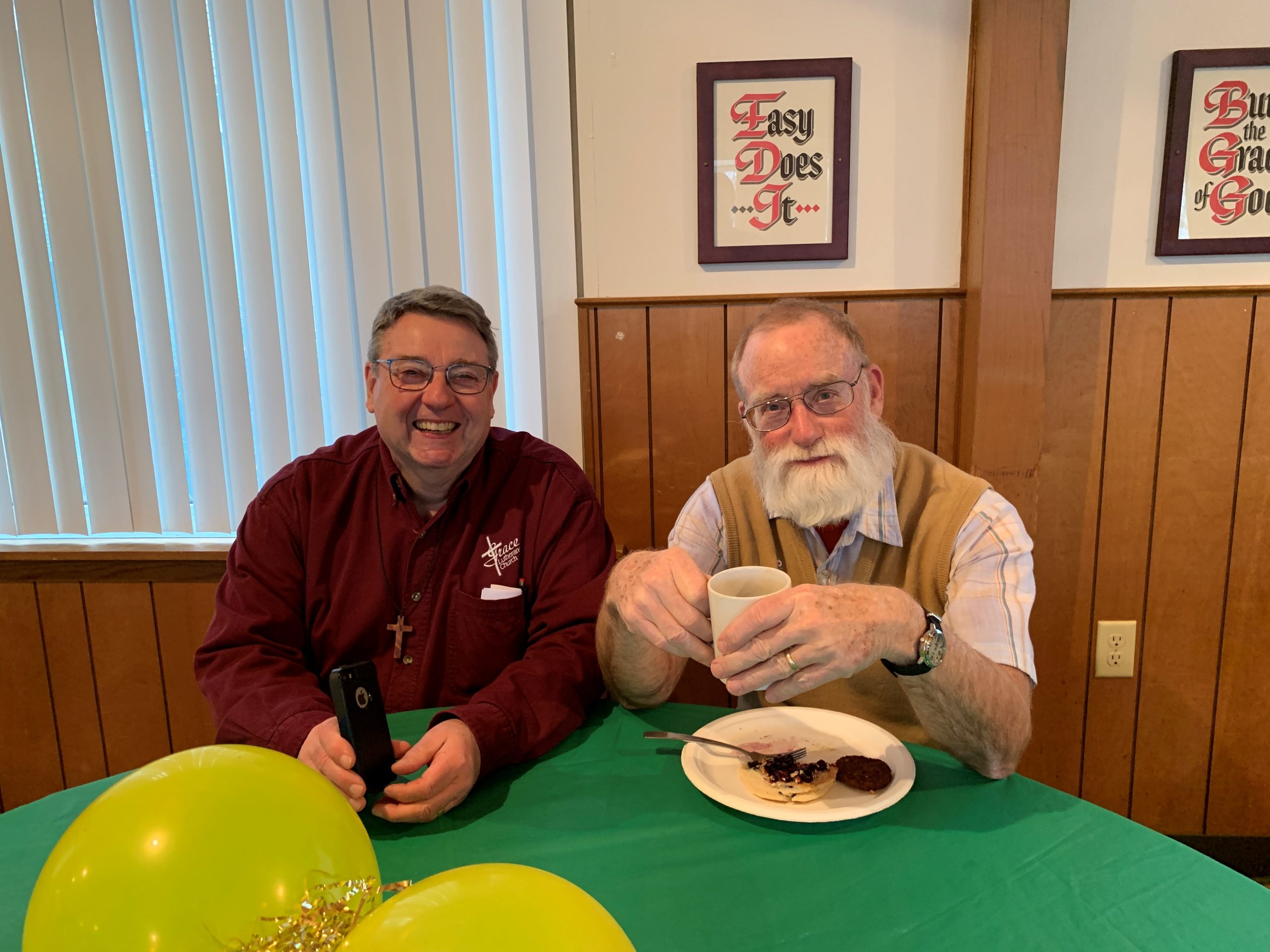 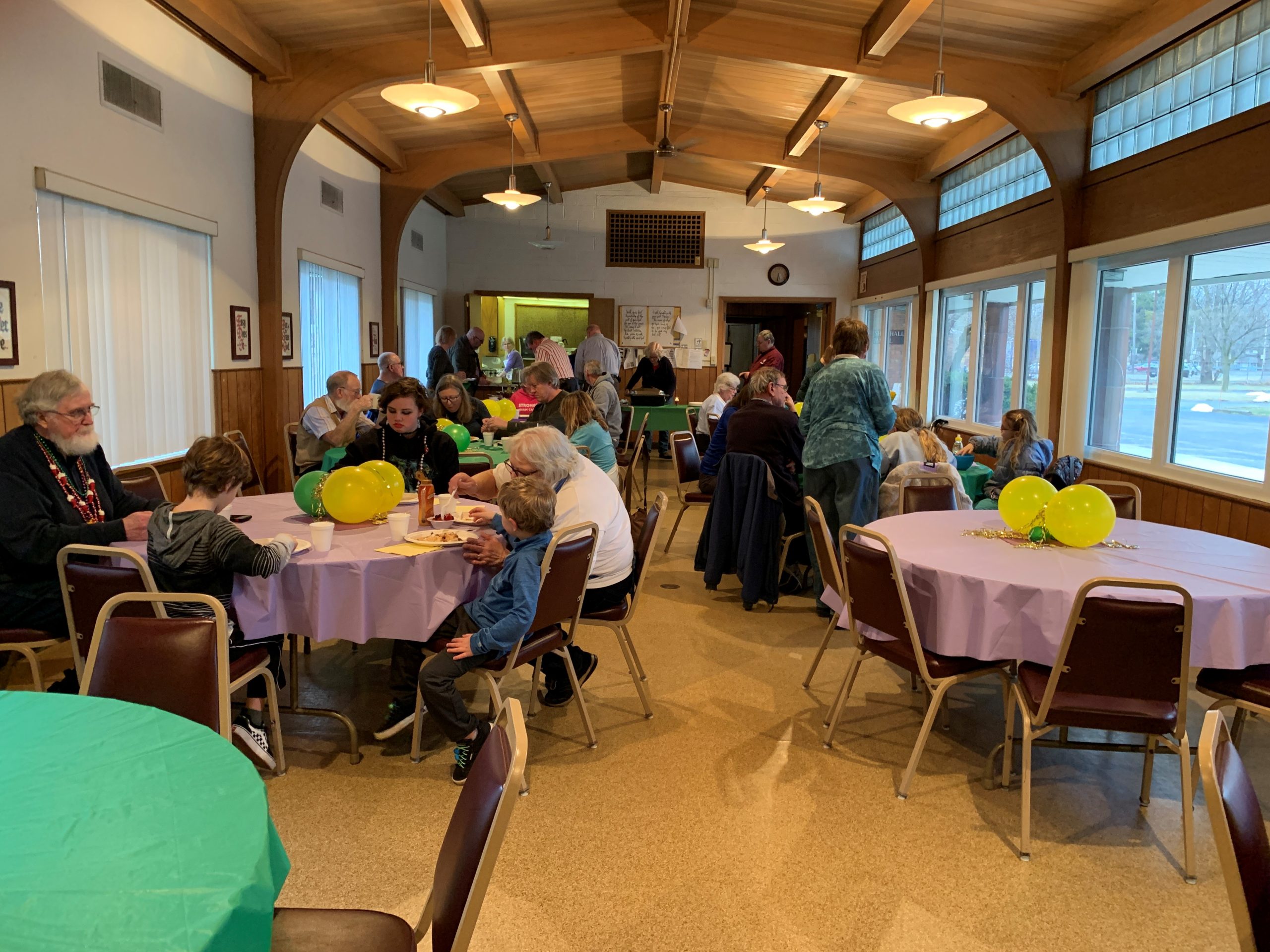 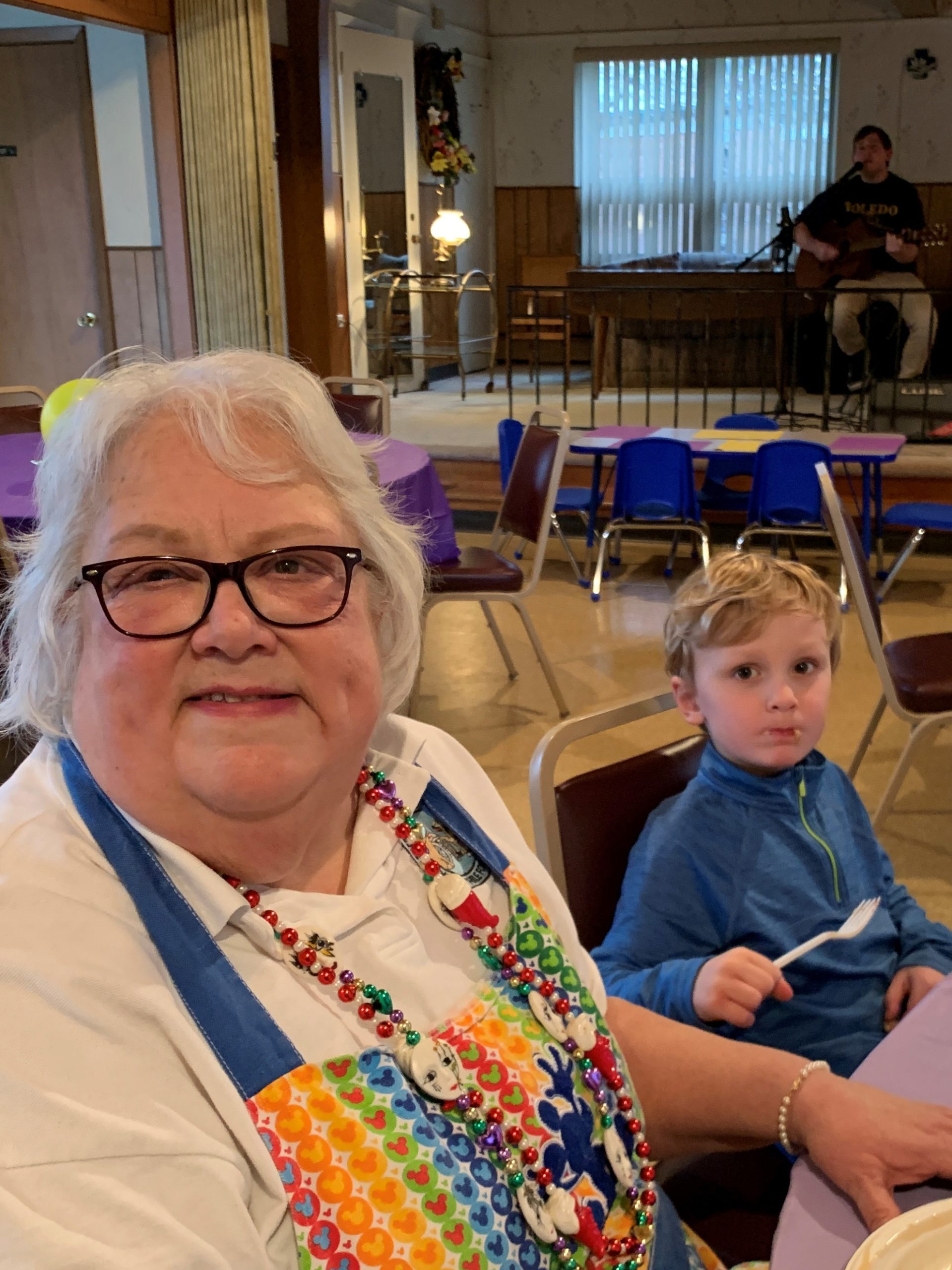 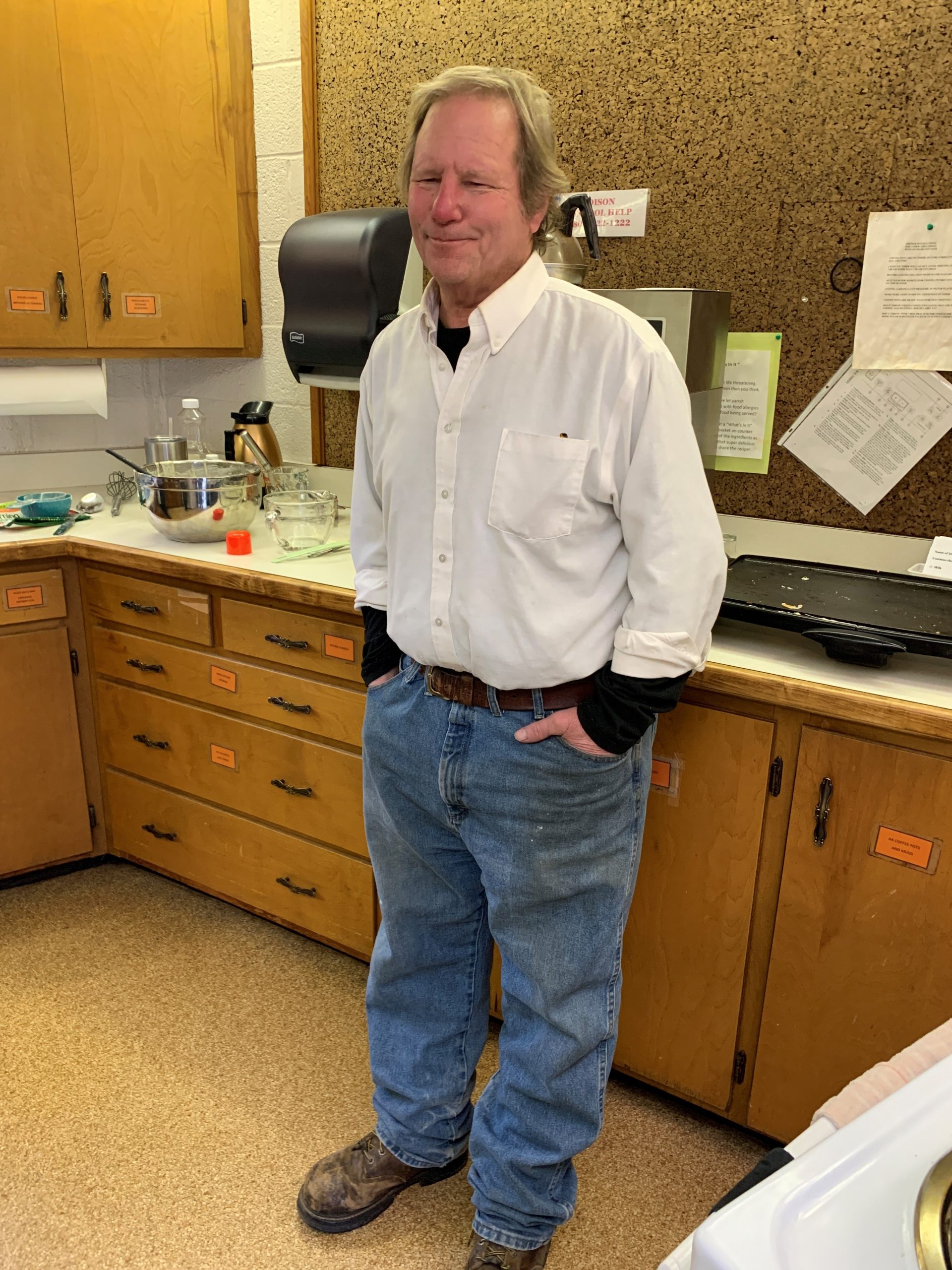 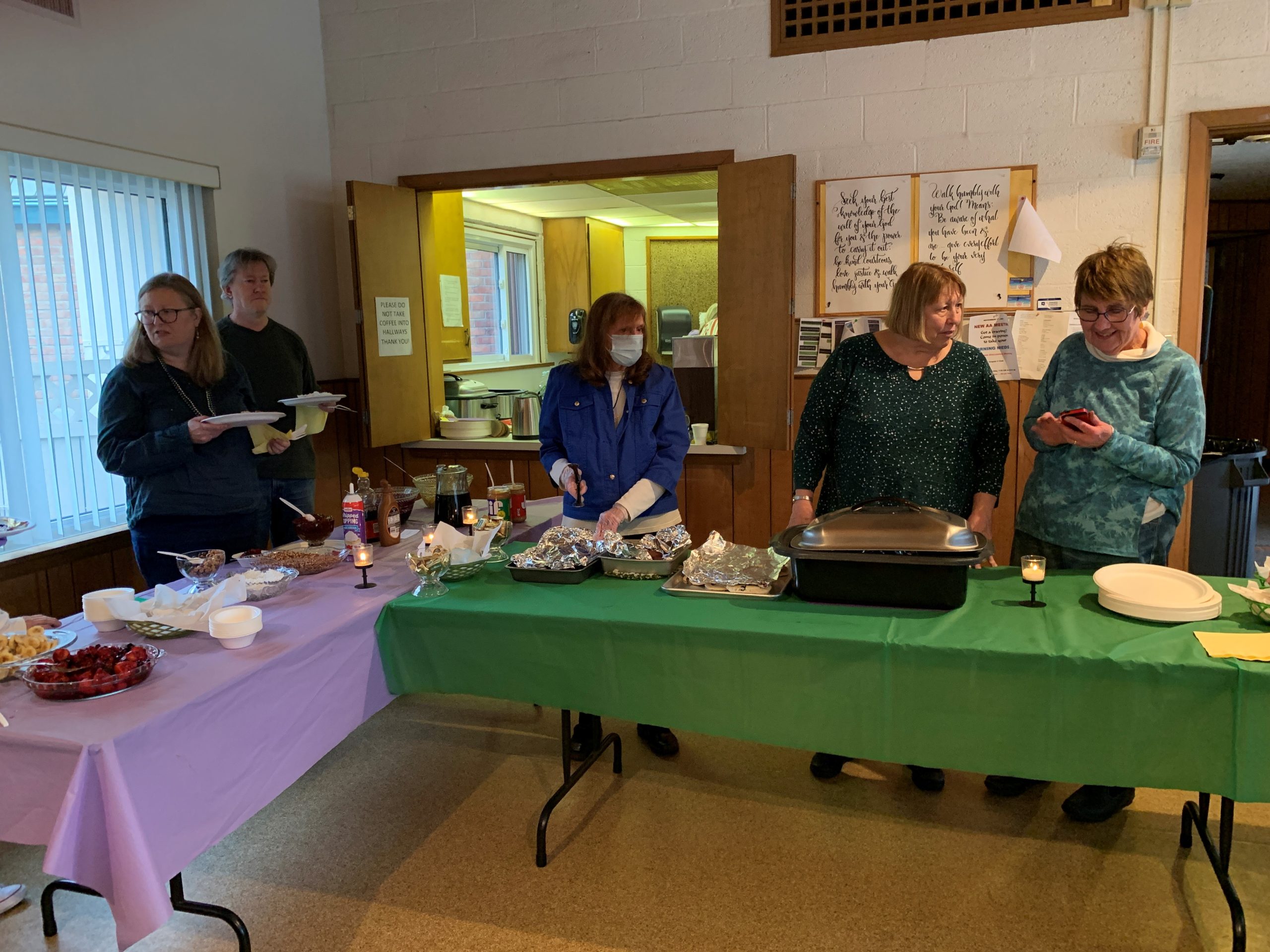 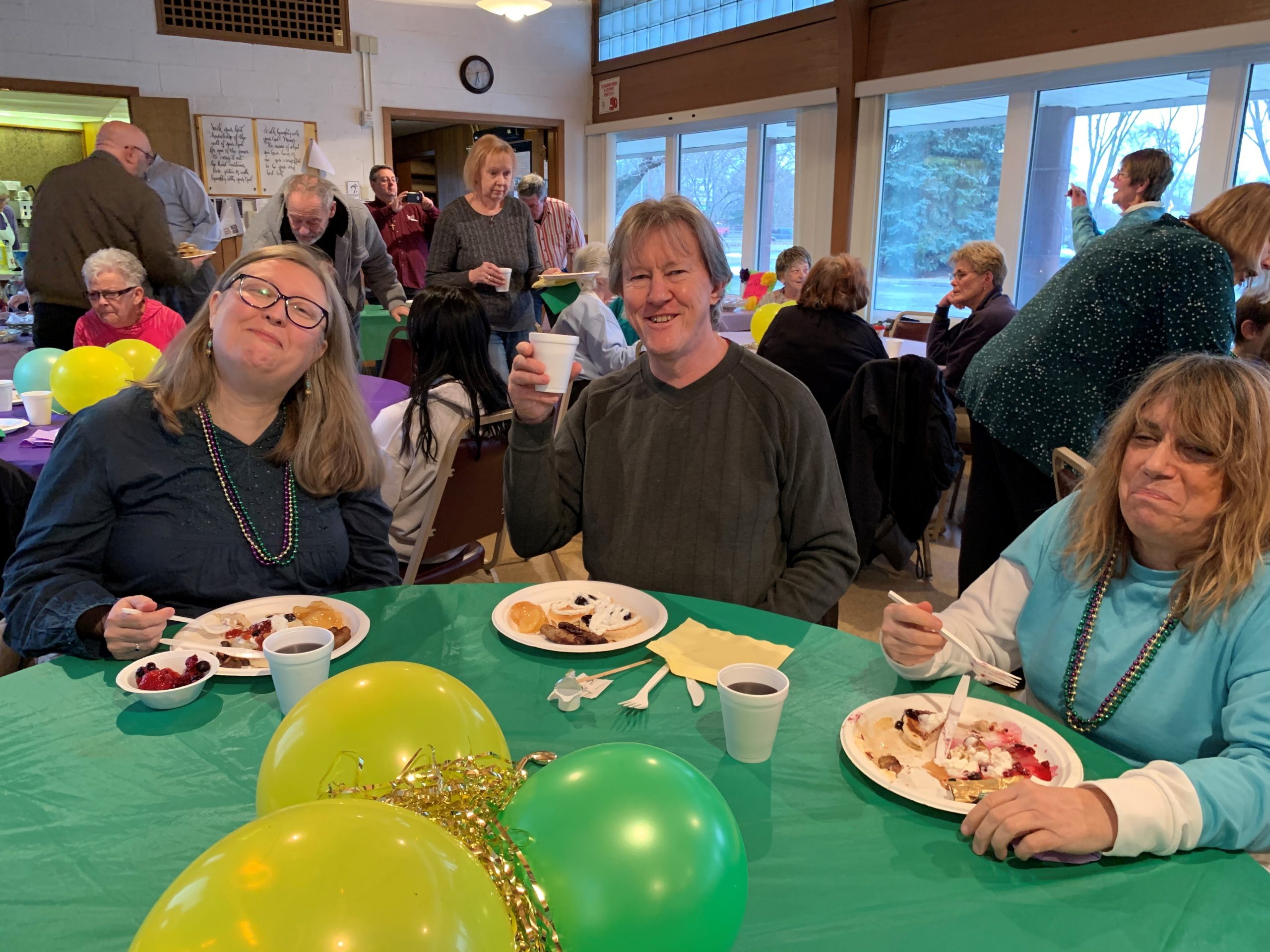 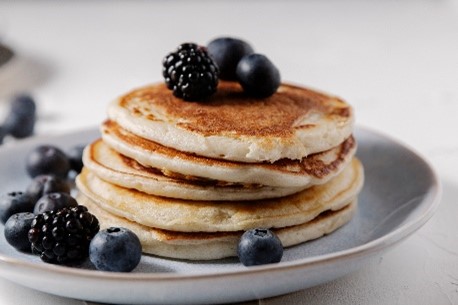 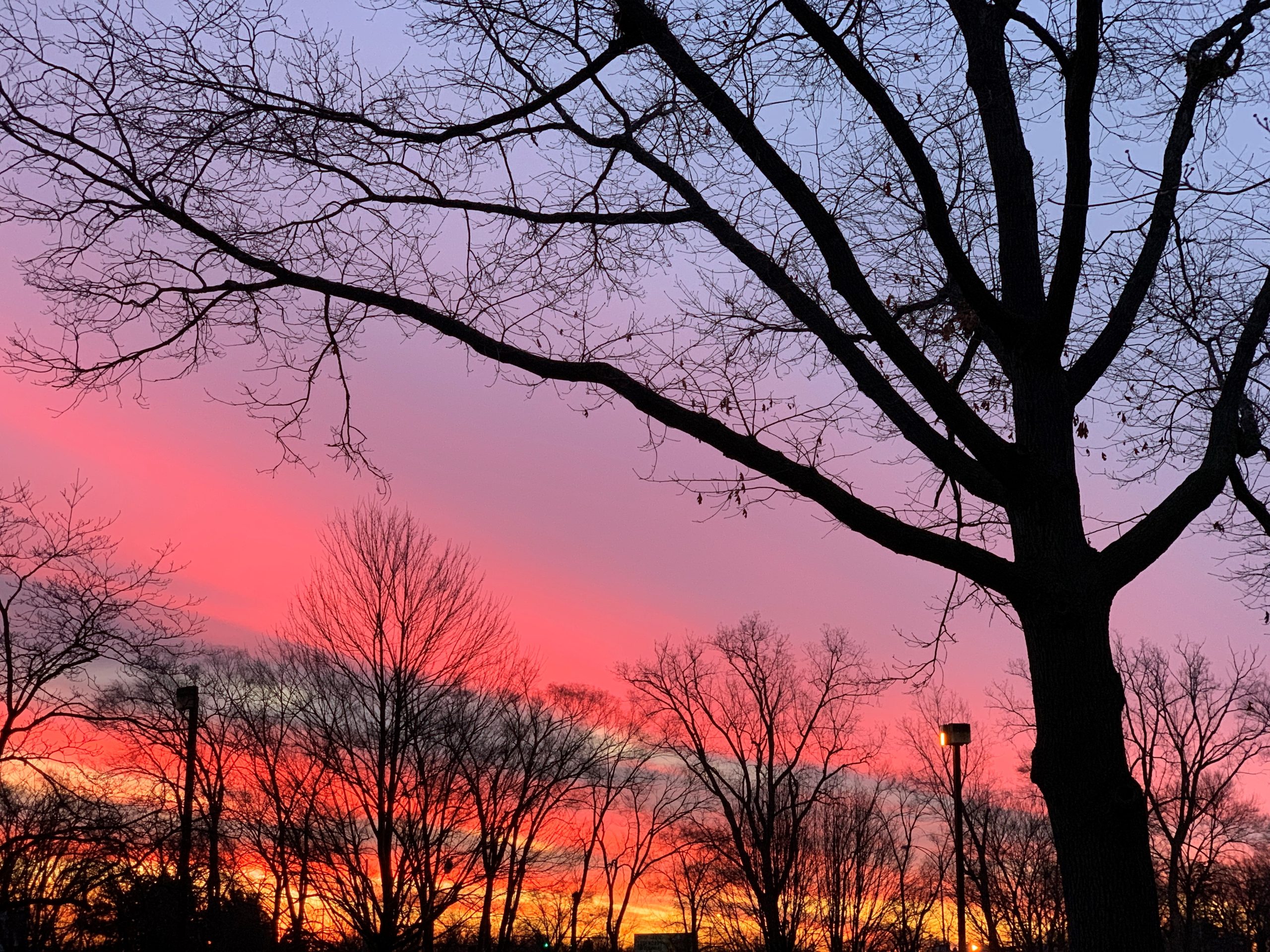