How good and how pleasant it is,

when kindred live together in unity!

The Outreach Committee is pleased to announce that donations for 30 Breakfast Baskets were received. On Tuesday, March 30, eight Personal Needs clients received  baskets and they were thrilled with their gifts. Thank you to all who donated to this special project for the season of Easter. Breakfast baskets will continue to be given out with the next distribution on April 13 and continuing on Tuesdays until all 30 are given out.

Thanks be to God!

On Monday, March 29, 193 pounds of food was received for the previous week and at our food drop-off that day.  That food and the food collected this past    Monday will have been delivered to Aldersgate United Methodist Church for their food pantry.  What started out at Aldersgate as a church trying to help their neighbors in need has turned into an almost year-long project.  And Grace has been a huge part in this. Thank you!  Mary is still available on Mondays from 9 – noon at the entrance of Brenner Hall to take non-perishable, unexpired food items. Items can also be dropped off in or near the tote near the church office.

All spring graduates, whether it is from high school or college, are invited to be recognized at the 9:30 a.m. service on Sunday, April 25.  Graduation is no small event, it is a significant milestone marking both endings and beginnings, and your Grace family wishes to recognize this milestone.  If you are graduating and wish to be recognized on this special day, please contact the Church Office with the name of the school you are graduating from, your degree if you are graduating from college, and your plans for the future.   We look forward to recognizing you on this day.

Behind the scenes at Grace … 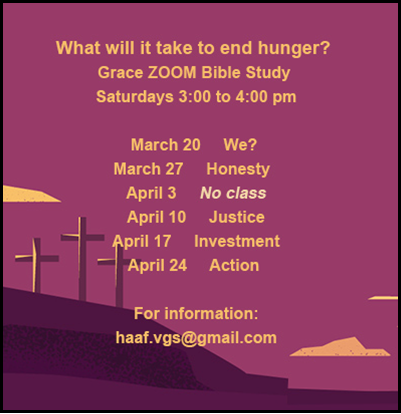 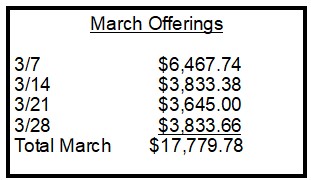 April is National Humor Month – hmm April Fool’s Day is a great way to begin but we need to keep the humor going!

Laughing long and loud not only improves your mood but is also good for your health. It helps us stay alert – think about the great blood flow when you are having a good laugh. Norman Cousins (author) watched old movies like the Marx Brothers and Candid Camera  while he was recovering from heart  surgery and felt they helped him get well quicker! Laughing helps to keep our sanity when things get a little crazy (like this whole year of Covid) It has been reported that the average American laughs 15 times a day – hmm think we need to increase this. Part of this is laughing at ourselves – humor is a great antidote for tension. It is easy to do, is free and fun.

Good humor is the best social lubricant. It smooths understanding, communication and cooperation. Make it your mission to get as many smiles as you can each day! Not only does it make the other person feel good but also you!

Remember that laughter and longevity go hand in hand. Grumps don’t live longer -it just seems like it . A buoyant outlook may be more important than oat bran and pushups (although these do help) and it’s a lot easier to take. 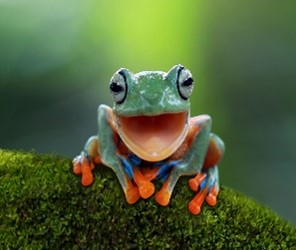 Why in the world would I need this? It is not the same as your medical record kept by your doctor and /or the hospital but provides them with information that may help them take better care of you. It is like keeping a journal where you track the details of your health care.

Take it with you when you have a doctor’s appointment – regular doctor or new doctor.  Most people are anxious when they go to an appointment and when you are asked what seems like a million questions, we can forget medicines, medical conditions, surgeries or vaccines.

Put your information in a notebook (something colorful so you can see it easily). Having paper like notebook paper lets you change and update information.

What are the BIG 5 smart things that should go in your health record?

The other important part of this is to keep it updated. Change and add things as you go to the doctors or if have a hospital visit.

**If you need to go to the hospital or Emergency/Urgent Care grab your record and take it with you.

If you need help putting this together Gretchen can help – just let her know. Gretchen is required to follow HIPPA guidelines so all information will be confidential.

When we give cheerfully and accept gratefully, everyone is blessed. (Maya Angelou)

There is no place like home (Wizard of OZ -Dorothy) 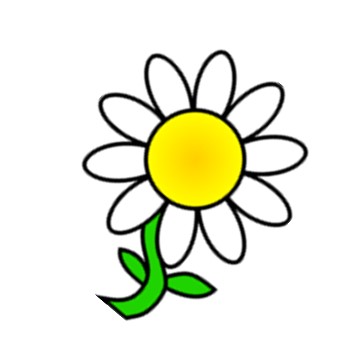 Most of us hate that Barabbas was released.

Because Barabbas is released, it means Jesus is condemned, scourged and crucified.

Barabbas, by all accounts, is the bad guy. The notorious criminal that is set free in the place of Jesus.

In Exodus, there is one part where God hides Moses in the cleft a rock while he passes by, because seeing God face to face would be too much for him. God comes surrounded by the weight of his own glory.

In one of Elijah’s most desperate moments, he’s hiding out in a cave on a mountain and God appears to him too. But the “preview” of God is cataclysmic: earthquakes, windstorms, fire. God comes surrounded by the weight of his own glory.

The same holds true as Jesus is unjustly condemned. God incarnate comes surrounded by the weight of his own glory. It precedes him and surrounds him.

But Barabbas? That dude? He’s an awful criminal.

Yep. And where sin abounds, grace abounds even more.

The Bible never says what happens to Barabbas. Maybe he continued in his sinful ways. Maybe he repented. I like to imagine him getting as far away from Jerusalem as possible, caught up in the goodness of the gospel, and telling his own story of being the first one that Jesus released.

For he is Barabbas, whose name means, “Son of the Father.”

Yes, feel free to reprint. A simple attribution at the end would be fine, something like this: 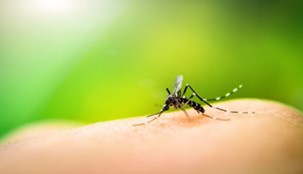 Does anyone remember going into a Lake and getting one of these on their foot or leg -screaming and yelling that all their blood was being sucked out? Then some adult would come running to find out what you were screaming about and then try to yank it off or pour salt on it to get it to loosen its hold? These are the basis for some really ugly nightmares about seaweed and cautiously stepping into lakes where you can’t see the bottom!

SO, indirectly Blood Donation might be seen as having a close encounter with a blood sucker, but they don’t involve stepping into seaweed or water and they are SO nice, clean, friendly and you even get treats for donating!

Please think about donating on Friday April 23 from 1-6:00 PM. Blood is needed every day, and this is such a great way to give back to the community! The time commitment is maybe 2 1/2 hours but so many people can benefit.

This is not limited to members of Grace but friends, co-workers, neighbors etc. 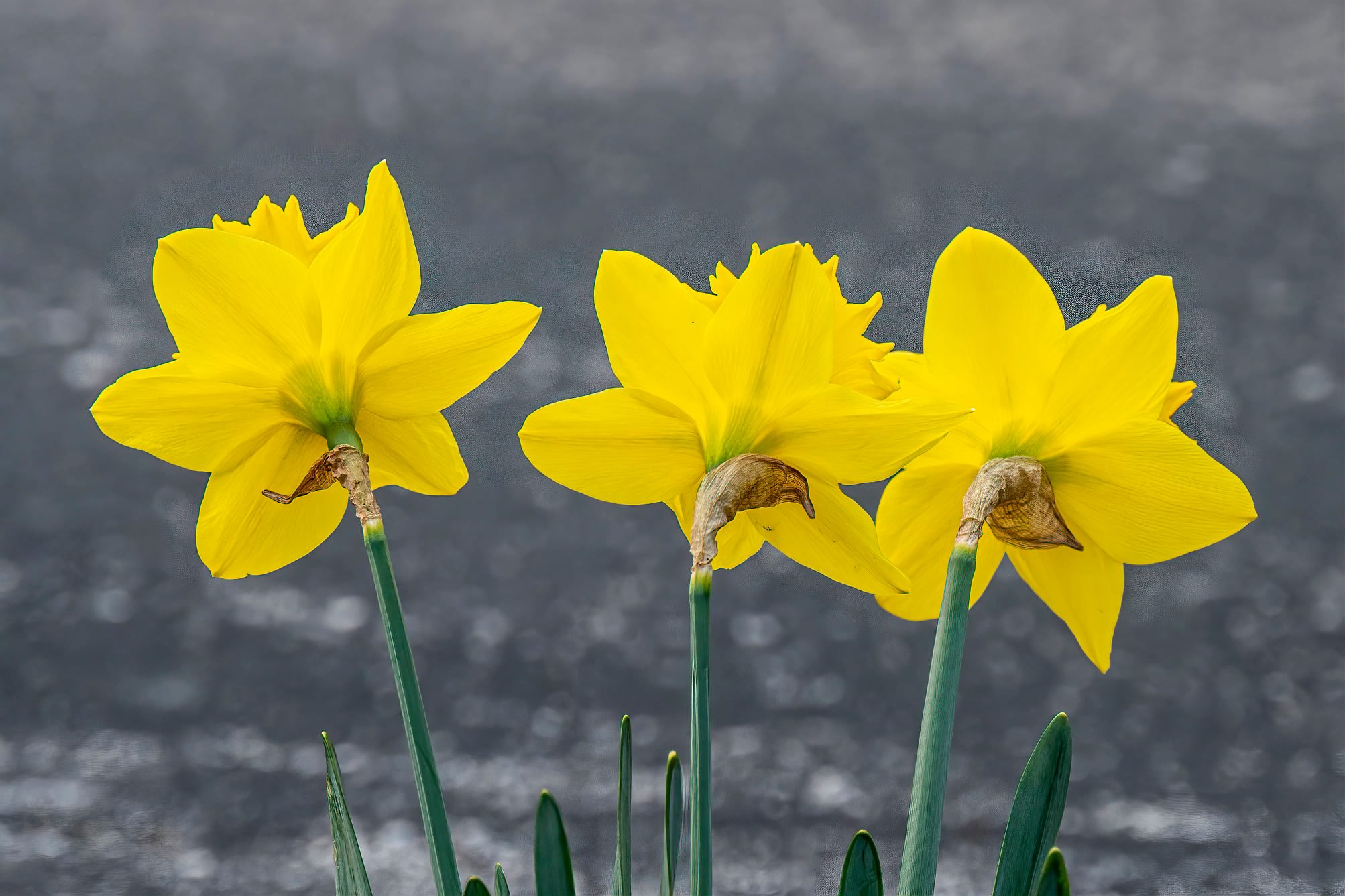