I will bless the Lord at all times;

The praise of God shall ever be in my mouth.

There was much joy at the Ragtime Rick Outdoor Service on Sunday August 1, 2021. Thank you to Rick and band and to all those here at Grace who put this together. It took many helping hands.  And thank you, God, for the absolutely gorgeous day of cool weather and sunshine! 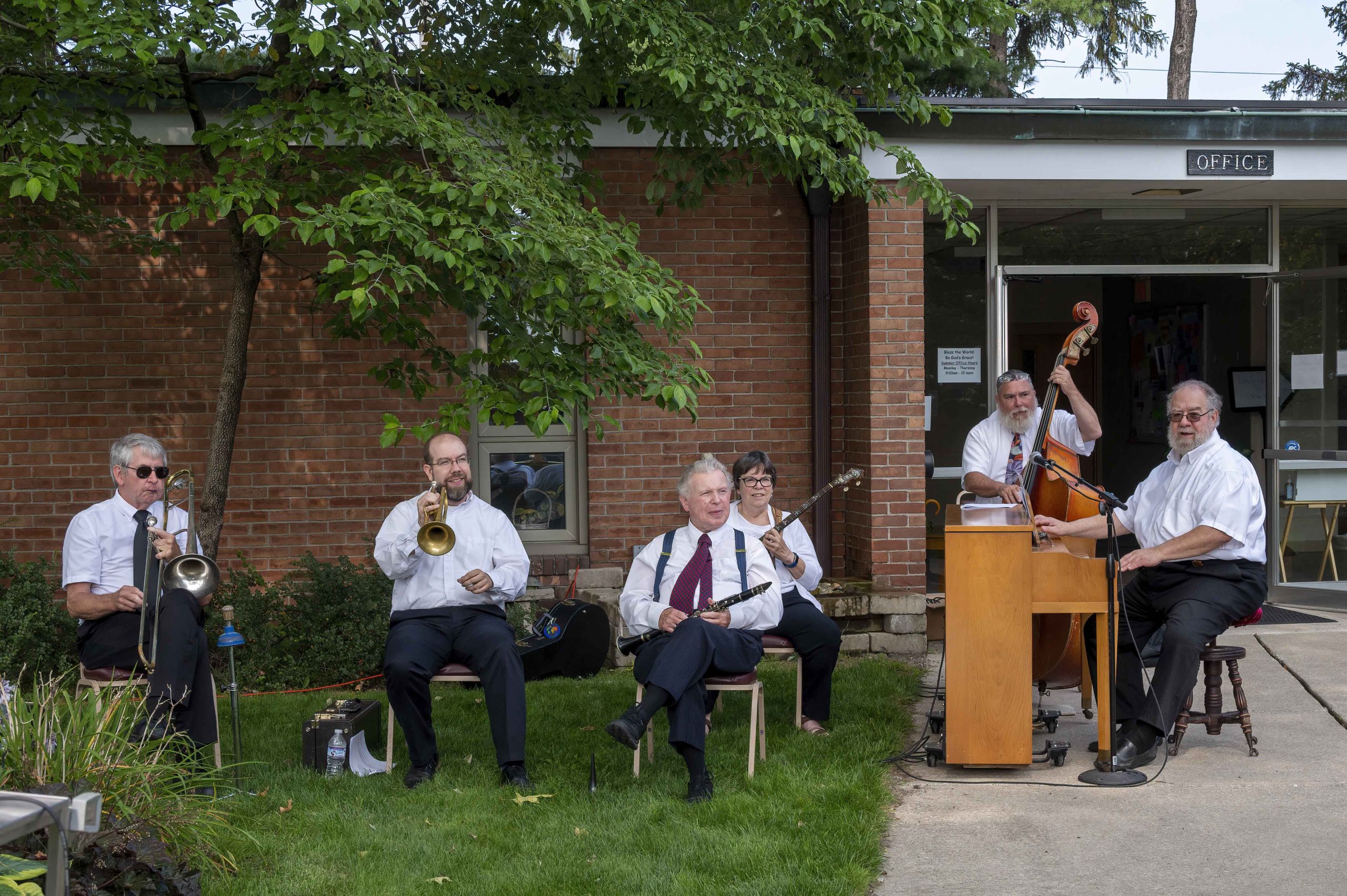 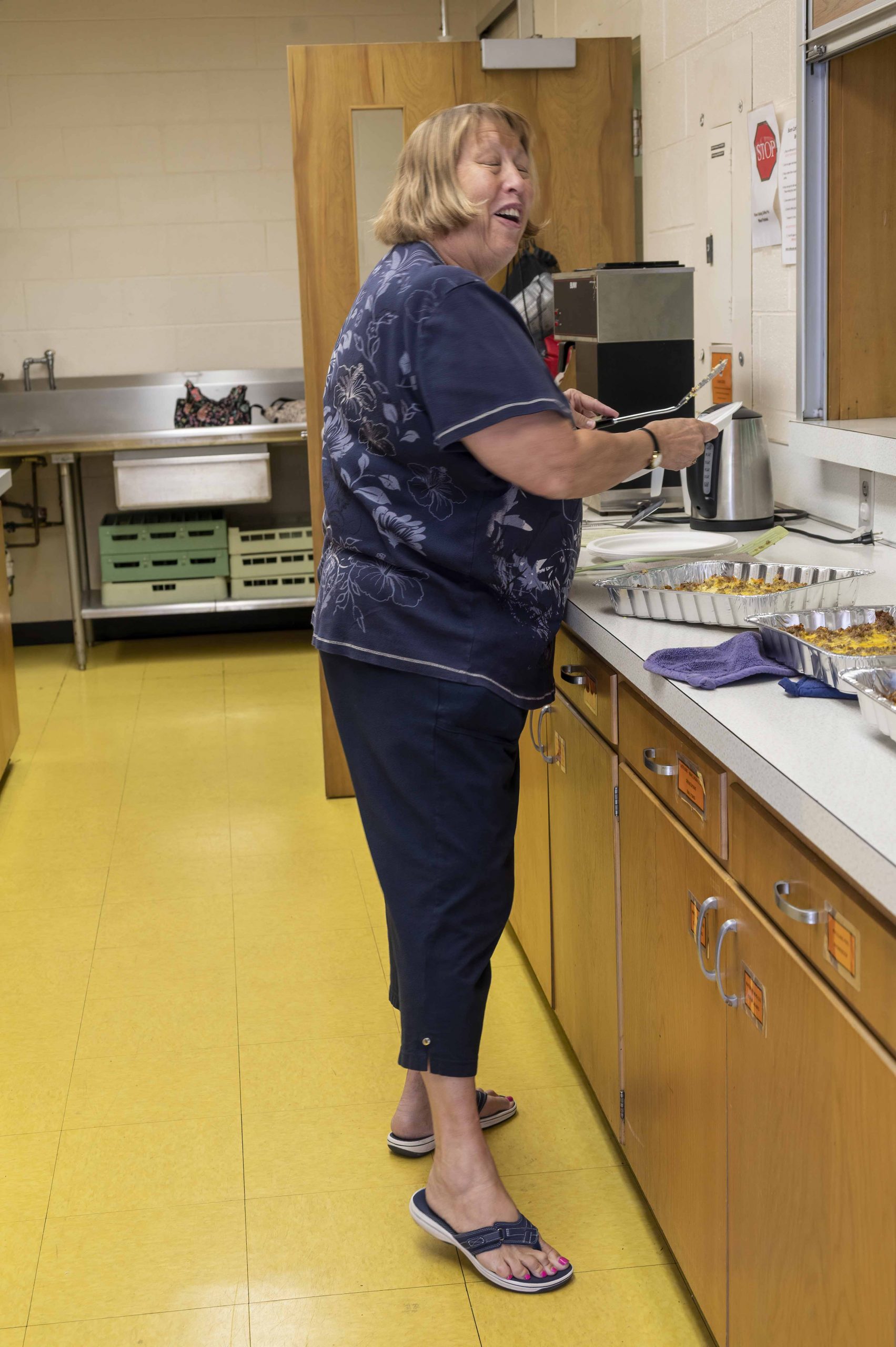 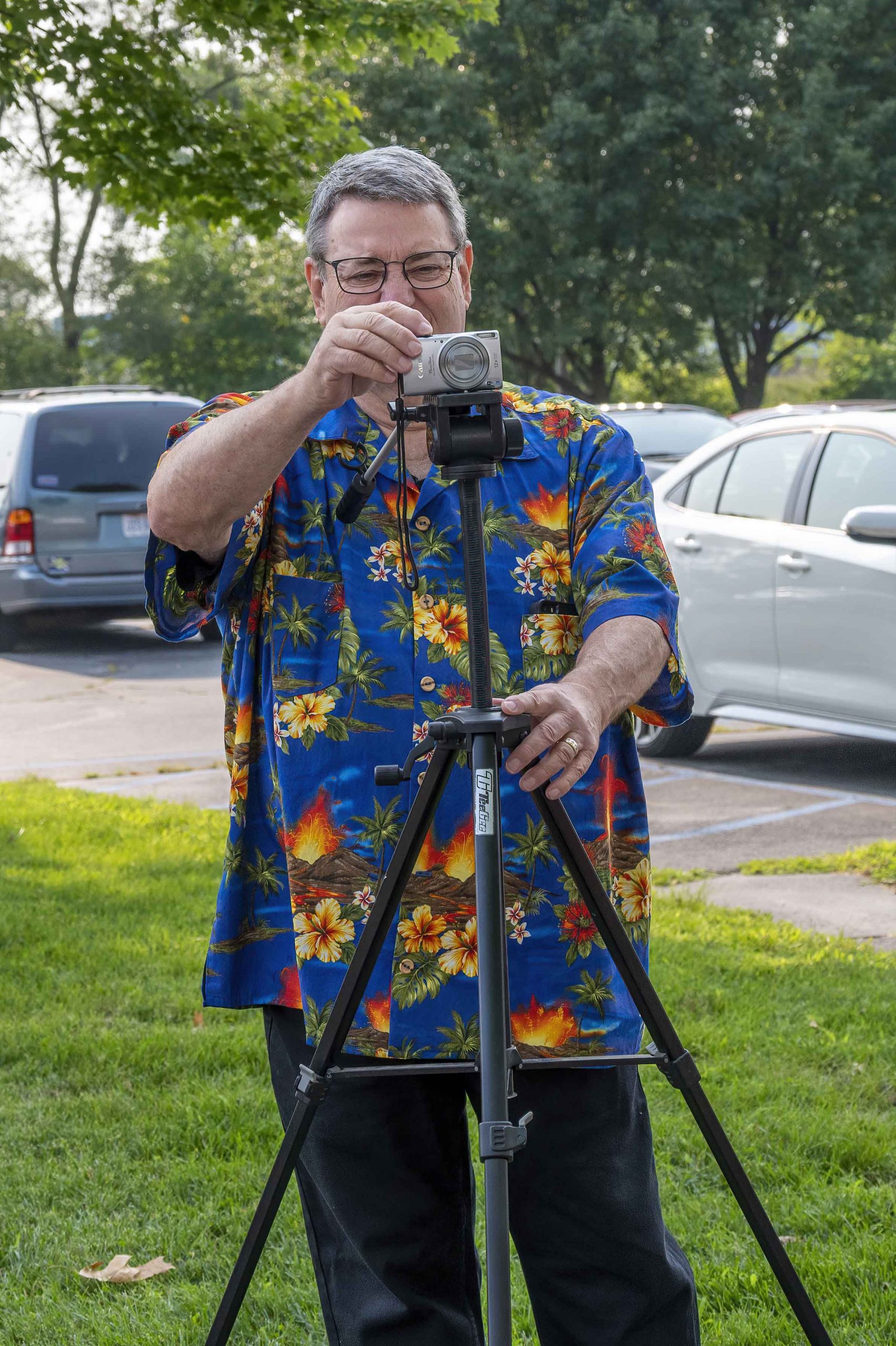 THANKS to Mary Schneider and Beth Charvat for making the delicious breakfast this last Sunday after the Rag Time Rick Service!!! 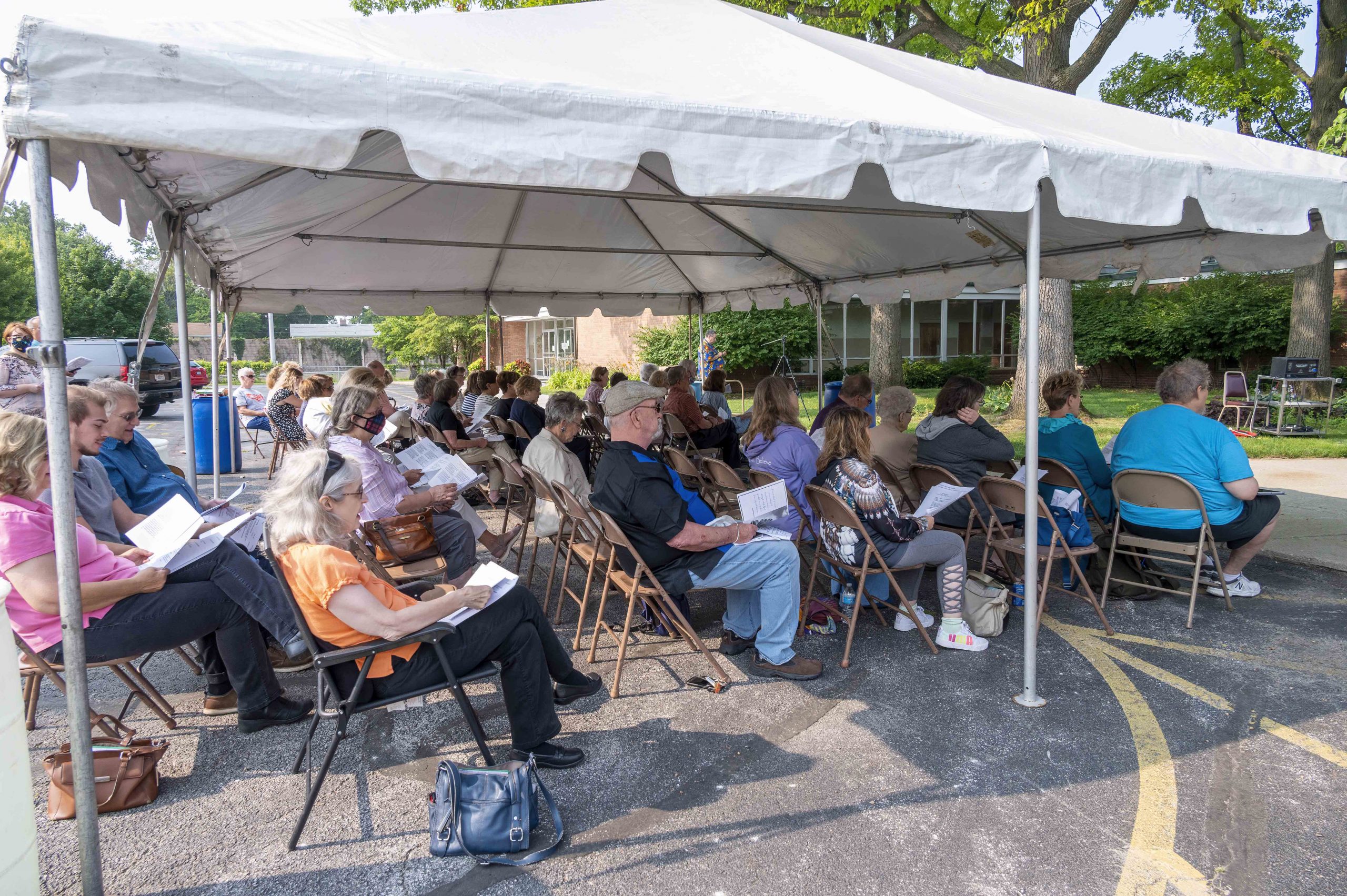 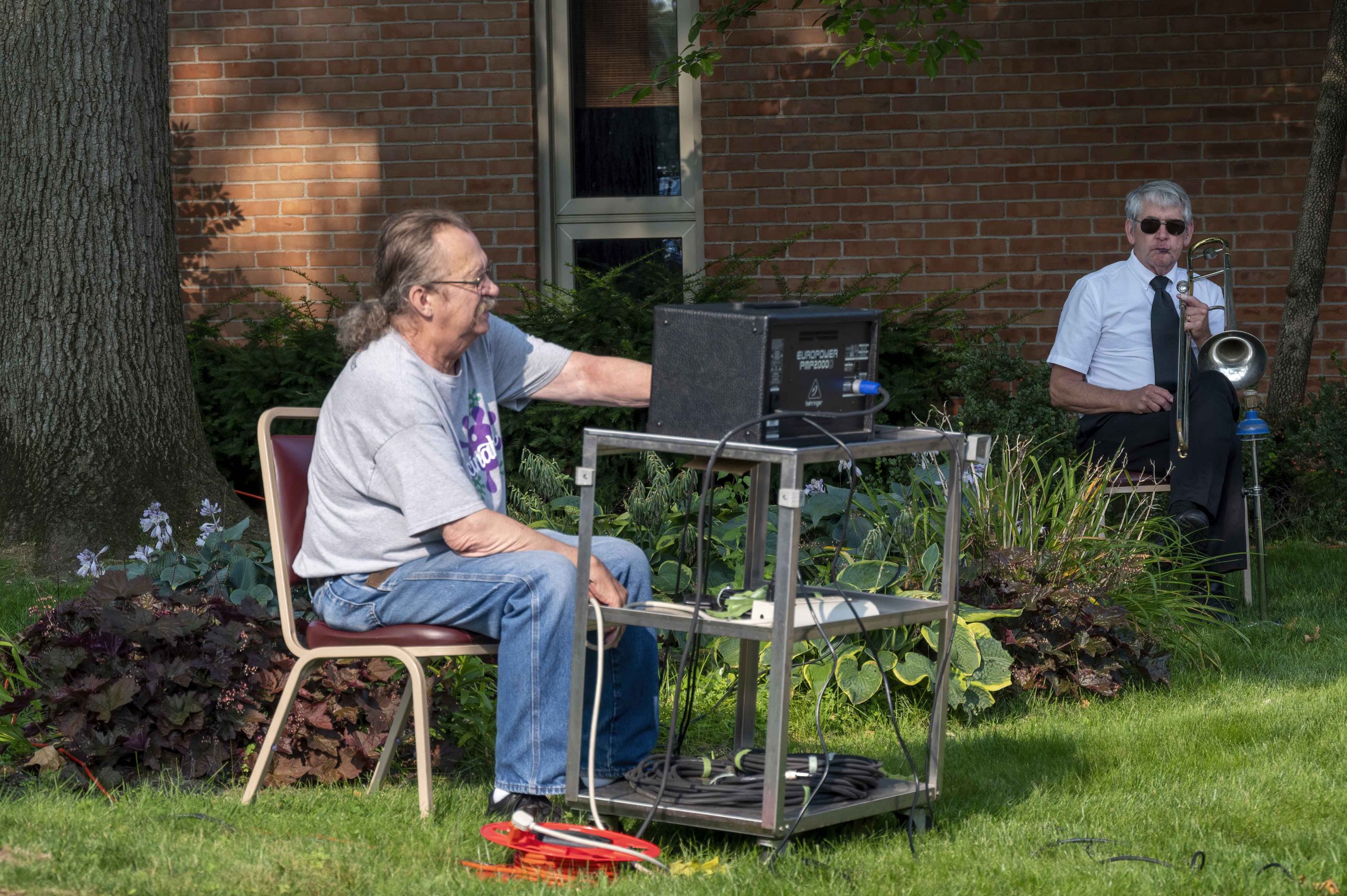 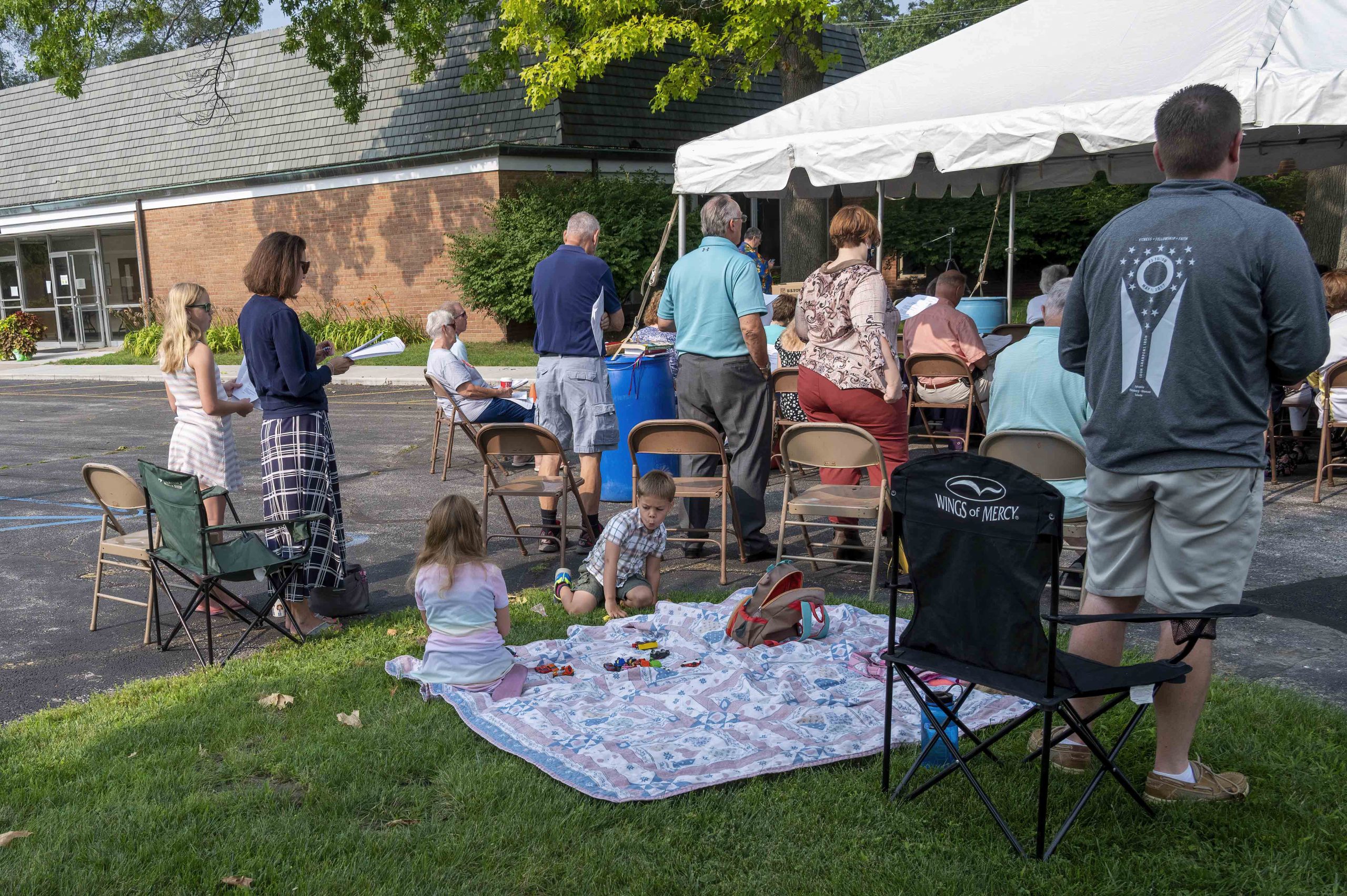 In a one-week period 150 pounds of food was donated to the Food for Toledo  program. Thank you to everyone who donates to this program. With the moratorium on evictions ending, it is expected that more people will be needing food for themselves and their families.  As was mentioned last week, peanut butter and macaroni and cheese is no longer needed as Aldersgate is getting these free at a food bank. The immediate need is for jelly or jam, pasta and pasta sauce, canned fruits and vegetables and Minute Rice. Families receive a jar of pasta sauce and pasta at every food distribution so there is always a need for these items. If you would have any questions regarding the Food for Toledo  program, please call me at 419.262.0730. 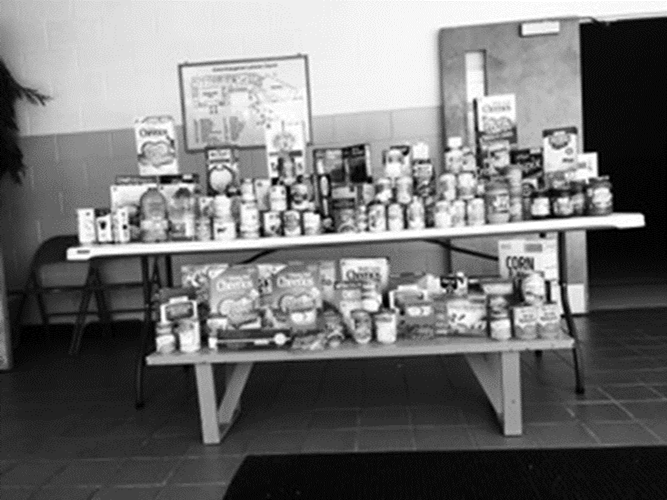 As of August 15 services will no longer be transmitted to the Grace parking lot.  Since vaccinations among members have occurred and we are streaming our services live on Facebook, members have not been utilizing the parking lot to attend the 9:30 a.m. service. If you still want services to be transmitted to the parking lot, please contact a member of the Worship and Music committee.  Committee members are Bob Haaf, Fritz Gooch, Dave Pettijean, Cindy Matthews, Cindy Wood, Mary Schneider.  And a great big thank you to Rick Sharp for making the transmission of our 9:30 a.m. service possible at a time when people were putting their health at risk by attending church but still wanted to hear the service.

Whatever dream seed you plant, don’t forget to fertilize it with hope, patience, and perseverance.

Jesus talked a lot about money. He talked about a man who was forgiven a debt of 10,000 talents but refused to forgive the debt of 100 denarii another man owed him. He talked about a landowner who hired workers for a denarius a day. He talked about a woman who put “two small copper coins, which are worth a penny” into the temple treasury. How much was a talent worth in dollars? Or a denarius? And was the penny the widow gave like one of our pennies, the next best thing to worthless, or was she maybe giving away enough to buy a meal, or even more?

Different translators deal with the problem in one of three different ways: giving the amount in the currency of their own place and time, giving the literal number, or stating a roughly equivalent non-monetary value. In Mark 6, Jesus is facing a hungry crowd, and tells his disciples to give them something to eat. They respond that they don’t have the money to buy enough. In the King James Version, they object in early 17th Century English money: “And they say unto him, shall we go and buy two hundred pennyworth of bread, and give them to eat?” The NRSV is more literal, and has them answer in their own money: “They said to him, ‘Are we to go and buy two hundred denarii worth of bread, and give it to them to eat?’” In the New International Version, they don’t talk about how much money it would take, but how long it would take to earn enough money: “They said to him, ‘That would take more than half a year’s wages! Are we to go and spend that much on bread and give it to them to eat?’”

One of the things I do sometimes at the Cabin is look at the old Popular Science magazines my father brought here instead of throwing them away. It’s a little   startling to compare what things used to cost with what they cost today. In 1961 you could buy a new car for $1,595: a VW Beetle. If you could even find a 1961 Beetle today in like-new condition, with new tires, new brake shoes, new muffler and shocks, unfaded paint, and an engine with only two or three miles on it, I think it would cost a LOT more than that. How does a 1961 dollar compare to a 2021 dollar? How about a 1969 dollar? What could you buy in 1969 with one of those? With 30 of them, you could buy a Sears DieHard battery. It would take 595 of them, though, to buy a microwave oven. Comparisons can get very tricky very quickly when we’re talking about one country’s money over half a   century or so. How much trickier will they be when we’re trying to compare the value of two countries’ currencies a couple of thousand years apart?

Behind the scenes at Grace…..

It has been fun to get together and see people we have not seen in a while. We have had 4 very interesting programs! Of interest is that 2 of our speakers who are not members of Grace have had a connection to family or grandparents who are members of Grace!

Our Next Ketchup is Monday August 9th. Our speaker that day must be back downtown by 11:30 so we are asking people to come at 10:30 that day only so the speaker has plenty of time to speak! We will still have a devotion and of course we have snacks as Lutherans hardly ever get together without food! 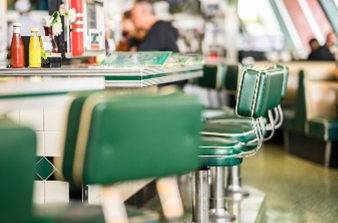 August 8th is National Lazy Day so go ahead after church be lazy.

August 10th is National Smores Day so why not on the 8th celebrate early and have a Smore!

I would like to thank EVERYONE who helped in anyway with our two  outdoor services this summer! This includes Grace’s office staff, Gretchen for her help and advice, Pastor Abts, Dave O’Brien, Fritz Gooch, Bob Haaf, Ron Hiatt, those that helped prepare and serve food and clean-up, those that helped set-up and take down speakers and    music stands and chairs, ushers, the musicians, and those that provided positive feedback about the services. Your help and encouragement was very much appreciated!

A Happening at Grace!

The need for blood is still critical! Each unit of blood donated can help 3  people and is a great way to give back.

Would it be great if Grace filled all its time slots! We have 43 slots and with each unit helping 3 people that would be 129 people helped! WOW!

Have you checked with your family MD about receiving the Flu Shot? The Flu season is fast approaching, and it is even more important to receive it this year.

so check on that Flu vaccination! 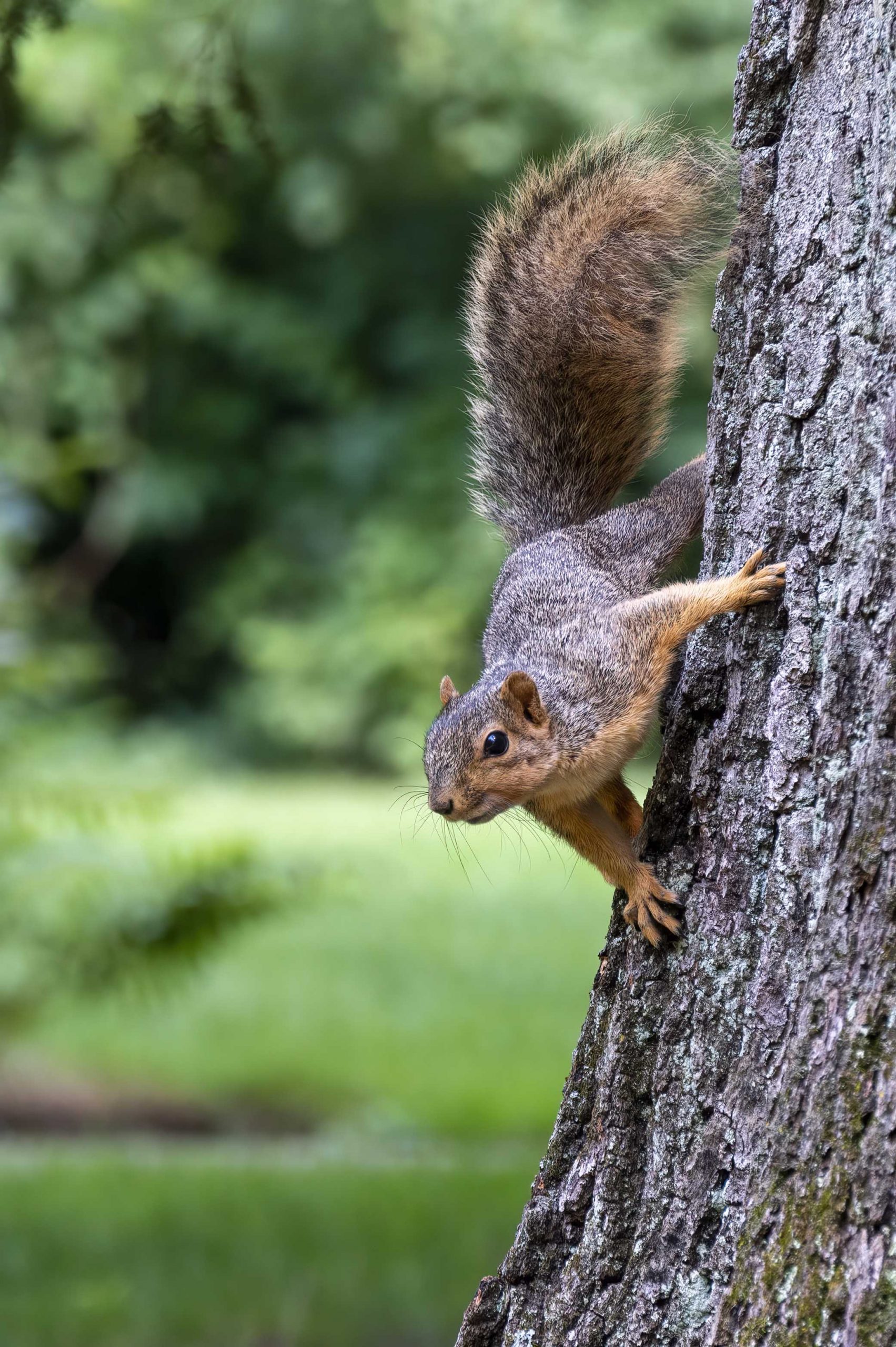